Mon-wen, Mini and I stayed clear of each other, and then on Thursday, I went over to Ed Mayers, and we addressed the choke:

o would not lock

o but stuck on

We took it apart, fixed it, and now works as it should.

Up early in the AM (0709) to give Mini a bath and pedicure for the annual Shaker Square Show.

I stopped at SpeedWay to top up on CAM2, and then over to McDonald’s, where I ate and joined up with friends, helpers, and neighbors Ed and Nathan Mayer in their 1974 MG Midget, and his lovely wife Jodi, in their MINI Cooper S.

We travelled in convoy through exurban, suburban, and urban interstate (I-90),  over city streets through downtown and  inter-city areas, and then past the Cleveland Clinic and Case Western Reserve University Campuses to Shaker Square. http://www.shakersquare.net/

(Jodi followed as the support vehicle, and she told us people where taking pictures of our cars on the highway).

We arrived, and setup.

Shaker Square (actually in the City of Cleveland) is a great place for a car show: an urban oasis where old and new come together.  Sharon arrived, and we had a great lunch at Fire with Ed, Jody, , and Nathan. –  http://www.shakersquare.net/ssm/fire.htm

We had a good day, as Mini took first

And Ed second, in a very good Midget class.

Ed and Jodi Mayer, above.

We had a nice drive back across town, and took Lake road from the Clague exit off of I-90, adding the scenes of Lake Erie and millionaires mansions to our viewing variety.

I recall many years ago, being in a small, old garage in Lakewood (Imported Car Service) that serviced British cars, seeing a poster from the Shaker Square show, and dreaming of someday being there…

“such stuff
As dreams are made on;”

From a Brit named Will (The Tempest), and though somewhat out of context, that’s my story, and I’m stickin to it! 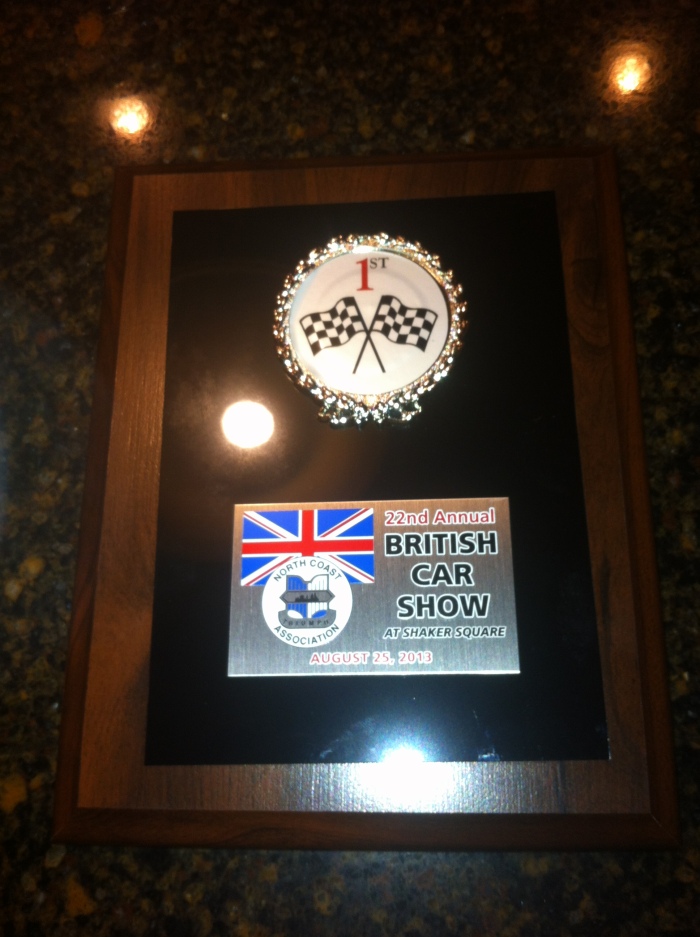 The current specs for our care are at: mini-specs

The sump guard and shifter were the last two items on my list, so phase III is complete!!

A popular item with me and our helpers has been this mat:

After Car Kulture, Mini was running not well at all at low revs – I observed the choke levers were not set equal.

Tonight, Brad came over and we adjusted them.

Test drove – better, but not quite there.

While testing, we stopped at the Mayers to visit Ed, his family, and his MG’s.

In the meanwhile, I had (drop shipped, via UPS) a bottle of vintage single malt – http://www.ancnoc.com/

to Graham Reid at Heritage Garage – who has been much help in our project.

When UPS arrives at his shop, it’s usually car parts, so imagine his surprise!

My UPS guy just showed up with the best parts delivery of the year.

Despite the temptation to immediately crack open this lovely looking bottle of 12 year old single malt I will wait until I get home.

I will toast you and the little yellow perils show circuit success right after dinner.

Thank you so much for the kindness and consideration.”

And THANK You, Mr. Reid  http://www.heritagegarage.com/

(N.B.: Graham patiently helped us up and down over many technical challenges this past year, and the single malt was an expression of our gratitude. The Moral of the story is that What Goes Around, Comes Around, and when we do well for others, others will do well for us….)

These young ladies are promoting a cause: end the negative stereotypes against tats and piercings!  (N.B.: we said Kulture!)

On Friday, I prepped Mini for the Lakewood Car Kulture show, held annually on the third Saturday of August.  This is an eclectic event of all types of cars -older than 1972.

Arrived, survived traffic, and got my place.

I saw some old friends, and my first Cousin – Jean kline williams .  Here is their 1949 Merc.

My son Allen arrived, and we enjoyed both the attention our car got, and viewing the other cars.

I had other priories on Tuesday and Wednesday.  On Thursday, Ed Mayer stopped back over, and we:

I plan to use a heavier spring for the clutch slave cylinder, as I found several.

I drove Mini to my dance lesson with Anya Kwan at Avon Ballroom: I enjoyed showing off  the car – an earned entitlement.

Back home, I decided to take Mini out for supper, and we drove to Burntwood Tavern in Rocky River – http://www.urbanspoon.com/r/16/1625439/restaurant/Cleveland/Burntwood-Tavern-Rocky-River

We stopped at Huntington Beach.

and then back home – Mini is doing well!!

In the early afternoon, I helped Ed Mayer tow his ‘new’ MGA home:

Chuck Linick texted me about going to the cruise in at Quaker Steak and Lube: 3 classic Mini’s among about 500-600 cars. 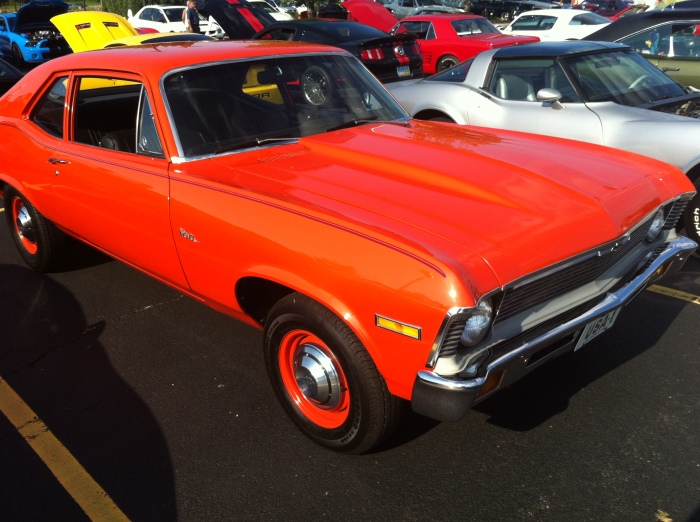 I met Ed Mayher and his trusty sidekick Nathan at the local Scottish restaurant, and we  drove on mostly back roads to the Brunswick Public Library, where we participated in a show with about 25 cars.  There was variety there, and a good time was had by all. 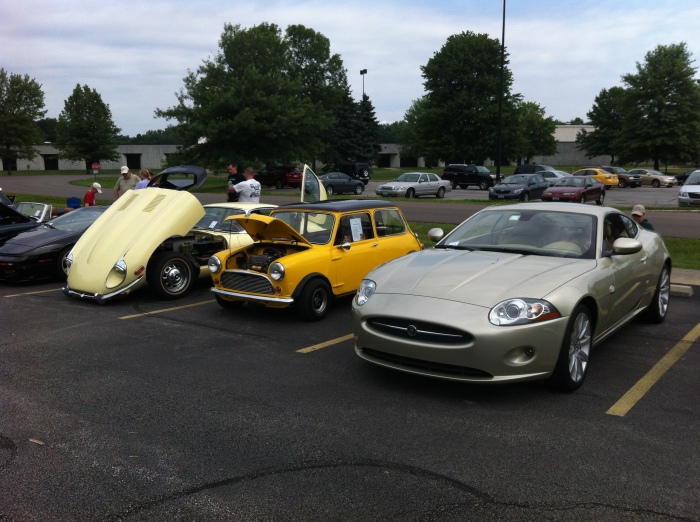 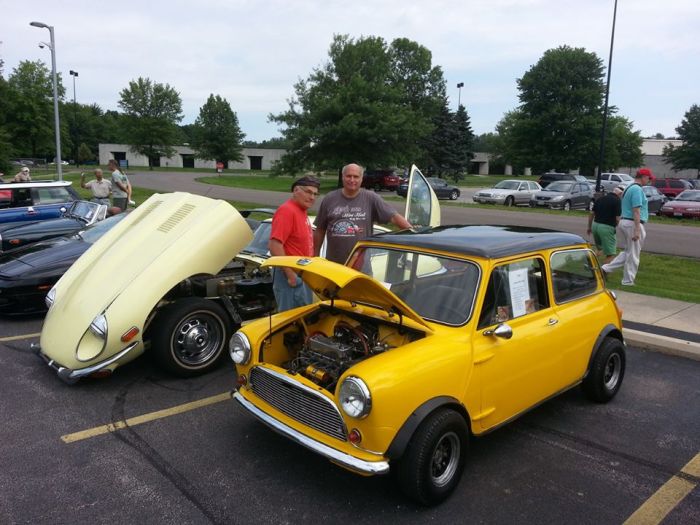 Later, several of us stopped at the local Panini’s  http://www.paninisgrill.com/locations/brunswick/, where the hiring policy was exceptional, and again, a good time was had by all.

A nice ride back brought us to the middle of the afternoon.

As in returning from Ursuline last Saturday, I noticed what appeared to be a wheel imbalance, I took Mini’s mounted tyres to have them balanced.

Then Ed Mayer, his son Nathan, and I went to Strongsville, to investigate a new project.

Back home, I picked up my wheels, mounted them, and then – in the evening – Sharon and I took Mini for a cruise to Weber’s ice cream and custard, where she enjoyed the local favorite. – http://www.yelp.com/biz/webers-premium-custard-and-ice-cream-cleveland